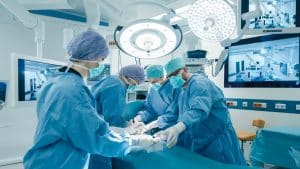 Doctors and hospitals argue that these multiple surgeries save costs, decrease wait times, and don’t have negative results, but there are common-sense risks and there are now reports and studies questioning whether concurrent and multi-patient surgeries lead to errors which endanger patients.

A Canadian study examined nearly 90,000 hip operations across 75 hospitals. The study examined patients, who were part of multiple surgeries, for a year after the surgery. The findings found that these patients:

In fact, the rate of complications increased seven percent for every 10 minutes the patient was in the concurrent surgery. The average overlap time was between 30 and 60 minutes but some went much longer.

One important issue raised as a result of the study is the need for doctors to explain that their surgery will overlap with another patient – requiring informed consent from both patients. Many hospitals and surgeons are not obtaining this consent. The failure to properly inform patients of the dual operations may be grounds for medical malpractice if a patient suffers unreasonable medical consequences from the surgery.

Dr. James Rickert, an Indiana orthopedic surgeon and president of the Society for Patient Centered Orthopedics, said “This study shuts the door on the idea that simultaneous surgery is as safe as solo surgery, when the doctor’s just concentrating on you. The size, the numbers, the multiple institutions, and the long-term follow-up dwarf any of those other studies.”

A US Senate investigation into simultaneous surgeries

There has been a concern in the medical profession that doctors who complain or oppose multiple surgeries are being wrongfully terminated. Statnews reported that an investigation by the Boston Globe about concurrent surgery practice at Massachusetts General Hospital, and about another study of concurrent surgeries at Swedish Health, a hospital system in Seattle, Washington. Both raised enough concerns that the US Senate launched their own investigation titled “Concurrent and Overlapping Surgeries.”

The US Senate report prefaced its discussion, which included input from Centers for Medicare & Medicaid Services (CMS), by noting:

“The Boston Globe article provided an in-depth review of concurrent surgeries being practiced at certain hospitals operating in the Boston area, alleging that the practice may have resulted in several instances of measurable patient harm, including deaths. Specifically, the article described operations in which surgeons divided their attentions between two operating rooms over several hours, failed to return to the operation when residents or fellows needed assistance, or failed to arrive on-time for surgeries, leaving residents or fellows to perform surgeries unsupervised or resulting in patients under anesthesia for prolonged periods.

A number of patient advocates also raised concerns to the Committee that the primary motivation for a surgeon to conduct concurrent surgeries was financial, enriching surgeons at the expense of patient care.”

The US Senate report did note the position of advocates of the procedure that concurrent surgeries help more patients get treatment from “in-demand surgeons,” and “helps train medical professionals by pairing senior doctors with residents or fellows.”