Making a Claim after Sustaining Property Damage from Hitting a Pothole 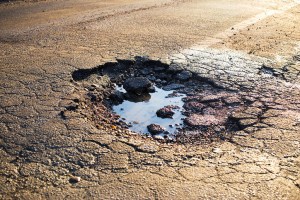 If you are one of the many people who have suffered damage to your car as a result of a pothole in Washington, D.C., you may be able to get the damage repairs paid for by the District. WTOP recently reported that “Drivers who unexpectedly slam into a pothole on D.C. streets can sometimes get the city to pay for the damage, and last year, one driver got more than $6,000.”

While it comes as no surprise to drivers in the District, WTOP stated that “More than half of the District’s roughly 1,000 miles of local roads and alleys, and more than a third of its 450 miles of federally funded roads, are rated as being in poor or fair condition.”

Here is the most important information from the WTOP story:

Claims also must be filed to the correct agency – any claim against the District for a pothole on a National Park Service parkway is rejected.

The Park Service has its own claim system, which also requires drivers show some kind of negligence in order to get compensation.

For claims against the District, drivers can file through the Office of Risk Management.

For claims against the Park Service, drivers can file through the National Capital Regional Office.

In Maryland and Virginia, claims on state roads go through the respective state offices. Most Northern Virginia roads outside of Arlington and incorporated cities are the Virginia Department of Transportation’s responsibility.

Hopefully this information is helpful. But the best solution to dealing with D.C. poor roads is to put the cell phone down, and pay close attention to where you are heading. Sometimes potholes cannot be avoided, but often they can.