Bicycle and Pedestrian Safety on the Roadways 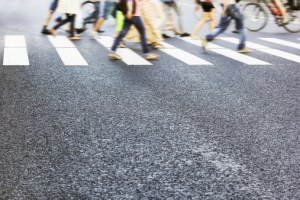 The U.S. Centers for Disease Control and Prevention reports that there is about one crash-related pedestrian death every two hours and a pedestrian accident injury every 7 minutes. In 2013, there were 4,735 pedestrians killed and approximately 66,000 injured in traffic crashes in the U.S. according to National Highway Traffic Safety Administration (NHTSA) data. In that same year, 21 percent of the children (age 14 and younger) killed in traffic accidents were pedestrians. One-fifth of the pedestrians killed in 2013 were involved in hit-and-run traffic crashes.

There were more than 900 bicyclists killed in the United States and approximately 494,000 injuries to bicyclists in traffic crashes in 2013. The highest death rates for adults in bicycle accidents occurs in riders between the ages of 15-29 and over 45 years old. Males are far more likely to be killed or injured on a bike than females.

What pedestrians and cyclists share in common is their vulnerability to being struck and injured or killed by motor vehicle drivers. Neither has any protection for their body in the event of a crash. In a September 2014 report, Safer People, Safer Streets, the U.S. Department of Transportation secretary Anthony Foxx wrote that “Americans have demonstrated that when we have greater access to safe infrastructure for walking or bicycling, we are eager to enjoy the health benefits, cost savings, and pleasure of walking or riding through our communities.” The report names pedestrian and bicycle safety as a top priority for the Department of Transportation because, “When safe and convenient transportation opportunities are available to every American, regardless of age, ability, or income, we all benefit from safer communities, a stronger economy, and a cleaner environment.”

In the District of Columbia, the Department of Transportation is addressing concerns about bicycle and pedestrian safety through its Street Smart campaign. In West Virginia, which has been named one of the top 20 bicycling cities in the south, there is a state pedestrian/bicycle program coordinator who is responsible for keeping West Virginia a bicycle friendly place.